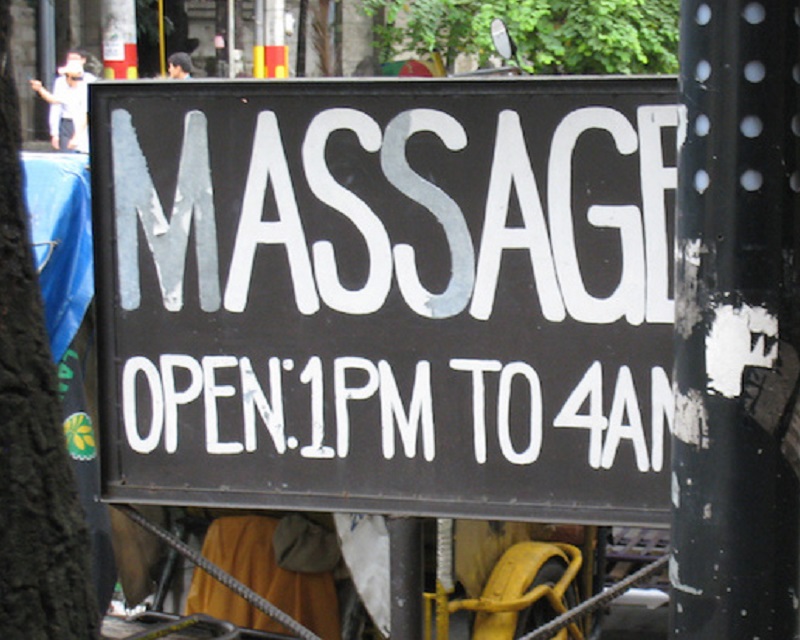 Have you ever seen or heard something on television or in a movie that made you feel a little gross inside?

People joke about happy endings all the time, stereotyping East Asian women as exotic, willing, and sexual. This joke has become commonplace in stand-up comedy, movies, and television shows like How I Met Your Mother:

The saturation of these jokes, and how they’re framed, lead us to believe it’s some harmless fun or a good place to catch a break from a hectic day at work. It’s easy to picture what it’s like to be the man in this situation—we’ve heard and seen his side countless times. But what these depictions don’t address is what it’s like for the woman. If they did, they might reconsider their image of the exotic, willing young girl. According to client findings, the average woman working in an illicit massage business is middle-aged (30s, 40s, maybe even 50s), doesn’t speak the local language, and may not know which city or state she’s in. She’s given little freedom of movement and no freedom to deny service to a client, and she left her family at home in another country with the expectation of being able to support them with this new, promising job in America.

Suddenly, that happy ending doesn’t sound so happy anymore. And jokes like this, from the movie The Hangover, may start to feel a little more uncomfortable.

Historically, women of East Asian descent have been stereotyped in media as hardworking, submissive, petite, and pretty. When music, movies, and television address ‘happy endings’ casually, they are furthering this racial stereotype and the gap in the public’s understanding of conditions in IMBs.

Illicit massage businesses look the way they sound: creepy and exploitative. Traffickers disguise these establishments as legitimate bodywork or massage businesses, securing legal permits and licenses in order to conceal sex trafficking and forced labor. They can include massage businesses, spas, reflexology, foot massage, and modeling. Owners and operators often ensure that women in IMBs don’t have a reason to leave the business. Sometimes that means being kept on-site 24/7. Sometimes that means that they all live in one apartment under the watchful eye of a trafficker. Their traffickers use the unfamiliar work environment and large amounts of acquired debt to control women while on-site in IMBs and if they are allowed around the city.

So I urge you to ask yourself this question: is the quick laugh really worth furthering racial stereotypes and joking about human trafficking?

If your answer is no, then share this information with your peers. We estimate that more than 9,000 IMBs are posing as legitimate businesses across the United States. All of those locations are potential sites of commercial sex trafficking and labor trafficking. When you joke, you joke about the women potentially being exploited day in and day out.