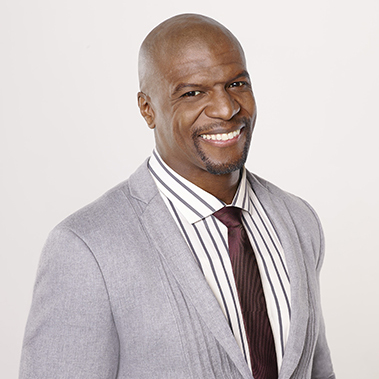 Action-movie hero, sitcom star, syndicated game show host, Old Spice pitchman, former NFL player, and best-selling author all describe the man that is Terry Crews. Over the past few years, Crews has been one of those actors you see almost everywhere; whether he’s the overworked dad on Everybody Hates Chris, a tough guy in the Expendables series, the lovable goofball in White Chicks, Will McAvoy’s bodyguard in The Newsroom, the pec-popping Old Spice pitchman, or congressman Herbert Love in Arrested Development, Crews has proven that he’s adept at both drama and comedy.

Crews currently stars on FOX’s Golden Globe award winning comedy series Brooklyn Nine-Nine as “Sgt. Terry Jeffords” and is also the newest host of the popular syndicated game show Who Wants to be a Millionaire? Audiences could also catch Crews on the big screen this year, with roles in Tyler Perry’s The Single Mom’s Club, Draft Day with Kevin Costner, Blended with Adam Sandler, as well as reprising his role in the third installment of the Expendables franchise. Not one to limit himself, Crews also added author to his resume this year with the release of his first book, Manhood.

Crews was born in Flint, Michigan, and attended Flint Southwestern Academy. He earned an Art Excellence Scholarship to attend the Interlochen Center for the Arts and then Western Michigan University. While completing his studies as an art major, Crews was a key member of the WMU football team, earning all-conference honors as a defensive end. Crews was drafted by the Los Angeles Rams in the 1991 NFL Draft. He carved out a career that lasted six seasons, including stints with the Rams, San Diego Chargers, Washington Redskins and Philadelphia Eagles.

A true definition of success, Crews’ life off-screen is as exciting and dynamic as his public persona. Crews is the caring husband of 25 years to wife Rebecca and proud father of five. Crews dedicates his free time to keeping physically fit-both in mind and body while also working with the non-profit Polaris, a leading organization in the global fight against human trafficking and modern-day slavery.