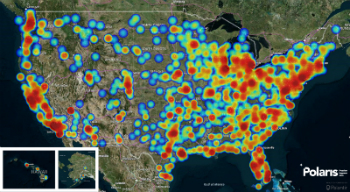 Comprehensive case and call data for the United States, including for all 50 states and Washington, D.C. are here, with the data for the BeFree Textline located here.

Additional analysis of the 2017 data, including the most commonly reported types of trafficking, demographic information on survivors, trafficker recruitment and control tactics, and top risk factors for victims, is available here.

Key highlights from the 2017 human trafficking data include:

“The National Human Trafficking Hotline is identifying and helping more survivors than ever, all while handling the highest case volume yet. This is a testament to the network of dedicated service providers, trained law enforcement, and survivor advocates working across America to help survivors restore their freedom, but the increasing caseload also indicates how far we still have to go to ensure human trafficking no longer thrives as a lucrative business,” said Bradley Myles, CEO of Polaris. “Through this data, we can illuminate human trafficking trends and identify the pressure points and areas for intervention in various networks to better target efforts and disrupt what is still perceived by traffickers as a low-risk crime.”

BACKGROUND: The National Human Trafficking Hotline is a 24/7, confidential, and multilingual lifeline that provides support and a variety of options for survivors of human trafficking to get connected to help and stay safe. Through a network of nearly 4,000 partner service providers and trusted law enforcement, trained Hotline Advocates take tips of suspected human trafficking from community members and help survivors build plans so they can safely leave their situations or get the help they need to rebuild their lives. The National Hotline can communicate via phone in more than 200 languages through a translation service, as well as text, chat, email, and webform in English and Spanish. The National Hotline is operated by Polaris and funded by the U.S. Department of Health and Human Services (HHS) and other donors.

Polaris emphasizes that the data released are not intended to represent the full scope of human trafficking, but rather the incoming communications received only through the National Human Trafficking Hotline and BeFree Textline. Breakdowns of case data available online are non-cumulative because cases may involve multiple victims and callers do not always provide specific demographic information. In 2017, Polaris released a groundbreaking report on the 25 most common types of human trafficking that exist in the United States, which can be accessed here.

People can be connected to help or report a tip of suspected human trafficking by calling the National Human Trafficking Hotline at 1-888-373-7888, texting “BeFree” (233733), or chatting at www.humantraffickinghotline.org.

About Polaris
Polaris is a leader in the global fight to eradicate modern slavery. Named after the North Star that guided slaves to freedom in the U.S., Polaris acts as a catalyst to systemically disrupt the human trafficking networks that rob human beings of their lives and their freedom. By working with government leaders, the world’s leading technology corporations, and local partners, Polaris equips communities to identify, report, and prevent human trafficking. Our comprehensive model puts victims at the center of what we do – helping survivors restore their freedom, preventing more victims, and leveraging data and technology to pursue traffickers wherever they operate. Learn more at www.polarisproject.org.