When was the last time you heard someone joke about a “happy ending” to a massage? Or walked past a massage business that seemed unusually unwelcoming — with covered windows, a locked door with a buzzer on it, maybe an “entrance around back” sign?

Massage business trafficking is happening in plain sight, in businesses that operate as if they are legal massage or bodywork establishments. It persists because we choose to ignore it — as something harmless, as something inevitable, or both: at best, a victimless crime. At worst, a public nuisance.

The real story is much harder to ignore. The women trafficked in massage businesses are typically immigrants from China or South Korea, usually mothers between the ages of 35-55 who are looking for a way to support their families. They are often lied to or seriously misled about the type of work they’ll be doing, by traffickers who know they have debts they need to pay or are otherwise in no position to say “no” to a source of income.

Once they are at the massage business, traffickers step up their control with a combination of manipulation and blackmail. A woman who speaks little English, whose identification documents are held by traffickers, whose finances are controlled by traffickers, and who has been transported by traffickers to an unfamiliar place, is told that she has the “choice” to provide commercial sex or to leave and take care of herself.

Traffickers have told her that if she leaves no one will help her, that the police are corrupt and won’t listen to her or believe her, that she will be arrested for prostitution or deported, and that her family will be told the shameful story that she is working in the sex industry in the United States, and will be required to pay off her debts. Given this situation, there is no real choice for the victim. Either she stays at the massage business, abiding by the rules set by the trafficker, or risks losing everything. 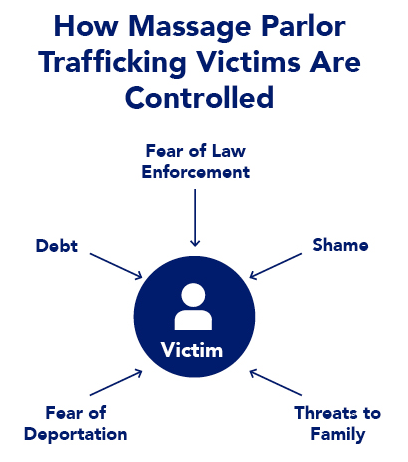 Due to this deeply manipulated sense of “choice” and pervasive feelings of shame, victims of massage business trafficking are very unlikely to immediately self-identify as trafficking victims to police or even to service providers. It takes specially-trained service providers and law enforcement officers to understand this dynamic and support victims, while carrying out thorough investigations that will ultimately hold the traffickers accountable.

Min came to Southern California from the Fujian province in China. She had dropped out of school in the 9th grade but had worked hard all her life. Her husband had always gambled and now had more debts than they could pay, so she came to visit a friend in the United States and look for work. She found an online ad for women to work as massage therapists near Los Angeles and was promised $6,000 a month with free housing.

She took a bus to the location on the ad and was met by a driver. Min showed the driver the name of the business and the address she had been given. The driver then drove for some time to an apartment where two other women were staying. In the morning, a second driver came to pick everyone up to take them to the massage business. On her first day, Min was told that in order to earn the money she had promised her family, she would have to engage in commercial sex.

Min had no idea where she was or how to contact the first driver to get back to the bus station. Min stayed and when she was able, told her family everything was fine. Min was deeply ashamed this had happened and never wanted them to find out. Whenever she came close to asking a customer for help, her manager would threaten to call the police, who she said would deport her and tell her family how shameful she had been. Every few weeks, Min would be moved to a new apartment and new business. All she knew was that she was still somewhere near LA.

Eventually, she wound up in a business that police were targeting. When they came to shut it down, they arrested the traffickers, not Min. The police then told Min she was actually in Illinois, nowhere near LA. The police helped connect Min with service providers in Illinois and then California. The service providers helped Min understand her rights and helped her enroll in English classes. Min is in the process of receiving a visa specifically for victims of trafficking, the T visa. Now she is honestly able to tell her family that everything is fine.

*This story is a composite based on dozens of reports by survivors, service providers, and law enforcement officials.