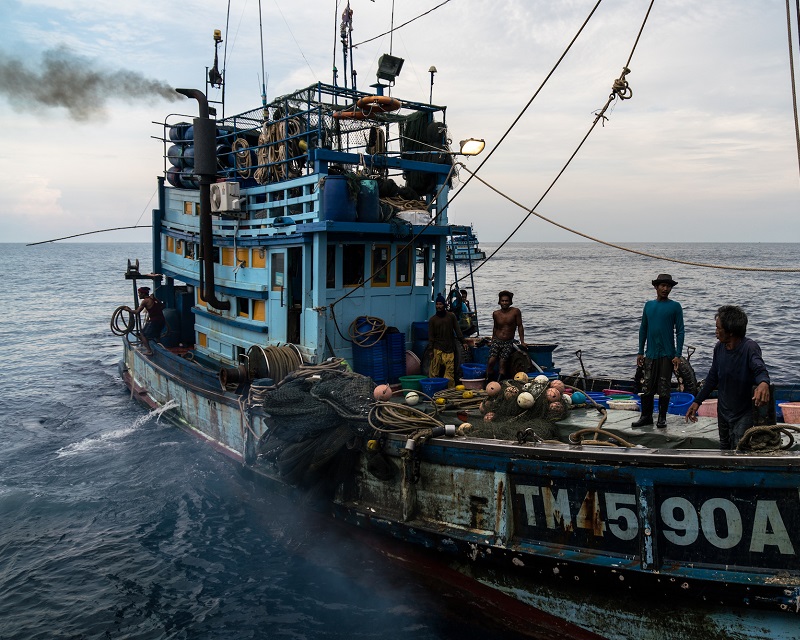 In partnership with investigative journalist Ian Urbina, we are highlighting a unique form of modern slavery that exists on the high seas. Ian has been reporting for five years on lawlessness at sea in many facets, much of which has revolved around sea slavery.

Slavery still exists and among its most brutal modern incarnations is found in the global fishing industry. The Outlaw Ocean series, and exploration of lawlessness at sea, began with a series of articles published in The New York Times and has continued as I found so many more untold stories, many of them truly devastating, that needed to be told.  In particular, these stories were tales of real life, modern slavery at sea. Sea slavery refers to the plight of deckhands who work as captive labor on the commercial ships that trawl the world’s oceans and fill the world’s dinner plates. To investigate and chronicle this global problem, I traveled to Somalia, Thailand, Indonesia, Myanmar, Somalia, New Zealand and elsewhere. What I witnessed is sometimes difficult to describe, such as the misery and degradation of the captives on these boats.

About a hundred miles off the coast of Thailand, three dozen Cambodian boys and men worked barefoot all day and into the night on the deck of a purse seiner fishing ship. Fifteen-foot swells climbed the sides of the ship, clipping the crew below the knees. Ocean spray and fish innards made the floor skating-rink slippery. The deck was an obstacle course of jagged tackle, spinning winches and tall stacks of 500-pound nets.

When they were not fishing, the crew sorted their catch and fixed their nets, which were prone to ripping. One boy, his shirt smudged with fish guts, proudly showed off his missing two fingers — severed by a net that had coiled around a spinning crank. Their hands, which virtually never fully dried, had open wounds, slit from fish scales and torn from the net’s friction. The boys stitched closed the deeper cuts themselves. Infections were constant. Captains never lacked for amphetamines to help the crew work longer, but they rarely stocked antibiotics for infected wounds.

On boats like these, deckhands were often beaten for small transgressions, like fixing a torn net too slowly or mistakenly placing a mackerel into a bucket for sablefish or herring. In 2009, the United Nations conducted a survey of approximately 50 Cambodian men and boys who had been sold to Thai fishing boats. Of those interviewed, 29 said they witnessed their captain or other officers kill a fellow worker.

Fishing boats on the South China Sea, especially in the Thai fleet, had for years been notorious for using these so-called sea slaves – mostly migrants forced offshore by debt or duress. The worst among these ships were the long-haulers, many of which fished hundreds of miles from shore, staying at sea sometimes for over a year as motherships provided supplies and shuttled their catch back to shore.

The boys and men who typically worked on these ships were invisible to the authorities because most were undocumented immigrants. Dispatched into the unknown, they were beyond the reach of any support, living with no way to escape on so-called “ghost ships” — unregistered vessels that the Thai government had no ability to track. They usually did not speak the language of their Thai captains, did not know how to swim and, being from inland villages, had never seen the sea before it became their home and their prison.

I also traveled to the Philippines to look into the companies known as manning agencies that recruit – often illegally and unethically – the men and boys who end up trafficked onto these ships. In small villages in the Philippines, police investigators, provincial prosecutors, seafarer advocates, and former deckhands told me about widespread patterns of trafficking and related abuse. I learned that agencies, most of them illegal, typically used local recruiters to target rural men, promising them twice what they actually paid them after they had signed exploitative employment contracts. The agencies then dispatched the recruits to some of the most violent and dangerous ships, usually Taiwanese tuna longliners.

Trouble at sea, including beatings, rapes, injuries, and killings, is common, but when violent crime and labor violations arise, the manning agencies often deflect responsibility for what happens to the men once they leave the shore. “And at sea, there are no embassies,” Celso J. Hernandez Jr., a lawyer with the Philippine Overseas Employment Administration, the agency responsible for protecting Filipino workers sent abroad, said about how detached and unprotected seafarers are.

I interviewed nearly a dozen villagers who, through manning agencies, had been duped and sent to sea. They returned penniless and often indebted from having paid broker fees to get the job.  Scams are not uncommon and Filipino labor officials readily admit that illegal and unscrupulous firms operate with near impunity.

Combating the scourge of sea slavery is a trans-national challenge, made only more difficult since the worst abuses often happen in international waters where few governments exert influence. To learn more about the problem and efforts to confront it, please visit theoutlawocean.com.