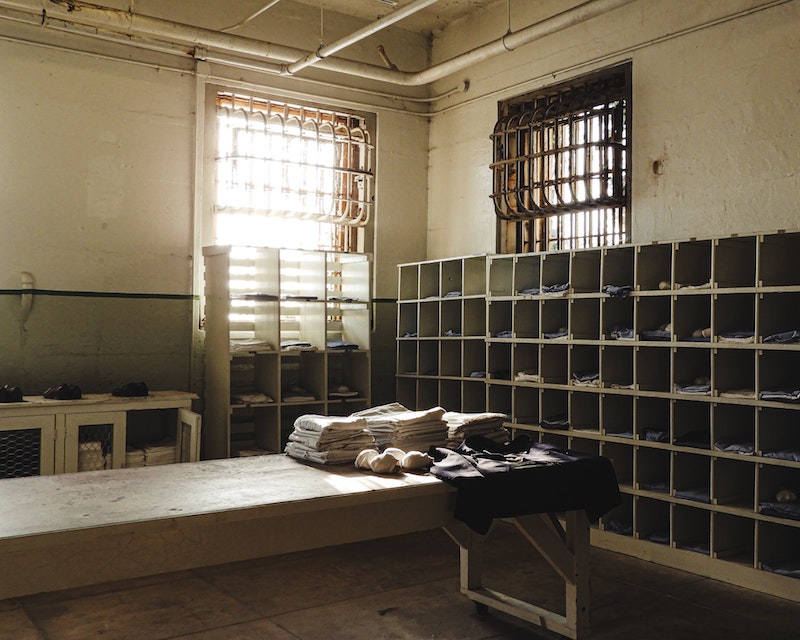 Most people assume that the Thirteenth Amendment to the U.S. Constitution wholly abolished legal slavery in the United States in any form. The reality, however, is that the Thirteenth Amendment contained one important exception: Prison labor. Those who have been “duly convicted” of a crime can still, legally, be forced to work in this country, and that exception has been a driving force for how our prison system looks today and the mass incarceration of Black Americans.

The United States defines labor trafficking as the recruitment, harboring, transportation, provision, or obtaining of a person for labor or services, through the use of force, fraud, or coercion for the purpose of subjection to involuntary servitude, peonage, debt bondage, or slavery. Prison labor often fits this description.

All prison labor has some financial benefit to the entity – private or governmental – running the prison. The most common type of prison labor is institutional.  These are the jobs that support the operations of the prison or detention facility. They may include cooking, cleaning, laundry, landscaping, and other jobs. Most of this work is for low pay, on average $0.14-$0.63 an hour, or no pay at all. In many of these jobs, without the use of this free or heavily discounted labor, the facility would need to hire a civilian employee to do the work at market rate. This difference in pay translates into a profit for the state or private company that is incarcerating individuals, creating an incentive to continue incarcerating more and more people.

The second type of labor incarcerated individuals typically perform is working for either a state or federal government correctional industry – businesses or corporations run by the government in question that operate in correctional facilities and utilize incarcerated individuals as free or cheap laborers. The type of work can include manufacturing, furniture building, agriculture, making license plates or signs, and making uniforms or apparel. Most products from correctional industries can only be sold to government agencies and non-profits within the state. The exception is for agricultural goods, which can be sold to anyone, including directly to consumers.

Why is prison labor a problem?

In many cases, incarcerated individuals have no choice but to participate in work programs that enrich the private prison companies or the state or local governments operating the facility. They are mandated to work unless medically unable.

The average wage per hour for incarcerated individuals is typically less than a dollar an hour and in several states inmates are not paid at all but still required to work. With criminal justice fees, fines, and paycheck deductions for room, board, and medical facilities, most people who get out of prison wind up owing the government money for their incarceration, making imprisonment a revenue generator.

In other cases, prison work programs are “voluntary,” meaning that incarcerated people can choose not to participate. But the choice looks a lot like coercion to people who are in dire financial need or who are threatened with physical harm if they do not perform the work. In prison, for example, a person without any outside source of income would not have the means to put money into their commissary accounts to purchase food, hygiene products, pay for medical visits, or make phone calls. Story after story has emerged from immigrant detention centers where detainees who have not been convicted of crimes have been forced to work to support the operations of the detention center.  Under the threat of solitary confinement, relocation into more violent dormitories, withholding of food or essential supplies like sanitary pads, or other coercive tactics, detainees acquiesce to “voluntary” work.

Increasingly, we are learning that the ways in which prison labor is being done by for-profit prison businesses is exploitative, with little consideration given to the exploitation of the incarcerated workers themselves. A number of lawsuits against GEO Group and CoreCivic, the two largest private prison corporations, are now emerging alleging forced labor and human trafficking. In a lawsuit against GEO Group, more than 62,000 complainants have joined a class action suit alleging forced labor in the Aurora Detention Center in violation of the Trafficking Victims Protection Act.  In a lawsuit filed by Project South and the Southern Poverty Law Center against the Stewart Correctional Facility in Lumpkin, GA, CoreCivic is accused of similar violations.

Incarcerated and detained individuals’ communication is monitored and this means that it is difficult for them to report abuses or violation of their rights. Even if they could report exploitative working conditions, many protections are unavailable for them as they are not considered “employees” in the traditional and legal sense and therefore are not protected by the Equal Pay Act, the Fair Labor Standards Act, the National Labor Relations Act, or the U.S. Occupational Safety and Health Administration (OSHA).

What can be done?

There is some hope on the horizon that things could improve. A recent court decision by the 11th Circuit Court of Appeals held that the Trafficking Victims Protection Act covers the conduct of private contractors operating federal immigration detention facilities. This ruling is a good foundational step but a great deal more work is necessary to uphold the protections afforded by the Trafficking Victims Protection Act to incarcerated individuals in prisons, jails, and immigration detention facilities.

State and federal oversight agencies need to ensure that all labor programs within detention facilities, prisons or jails are truly voluntary – that is free from coercion or force. Incarcerated or detained workers should be paid adequately for their work so as to not undermine local employment markets.  Proper safety protocols and worker protections should be put into place to decrease the risk of contracting COVID-19, workplace injury, or death.

The United States demonstrates its leadership by condemning regimes and nations that condone or perpetuate forced labor. The U.S. State Department’s annual Trafficking in Persons Report considers state-sanctioned forced labor and prison labor within its grading of anti-trafficking efforts.  And the Department of Homeland Security refuses to allow the import of products into the United States that are the result of forced labor.  As we hold other countries to these standards, we should also look to our own actions, and make the changes we need to at home.

To learn more about prison labor: